Hydrogen is seen as a vital tool to lower emissions across industrial sectors and to provide flexible energy for power, heat, and transport by many national governments, [1] large corporations and cleantech entrepreneurs, to name a few.

The recognition of hydrogen’s promise and a vision of a hydrogen energy pathway are anything but new – having emerged in the second half of the last century. What is different today is that perhaps at no other time before, was the societal need for viable hydrogen technologies so real and the market so ready for bold innovative solutions. The primary driver of course is the urgent need to reduce emissions and avoid irreversible impacts of climate change.

The International Gas Union (IGU) broadly agrees with this sentiment. Whilst the IGU has heretofore been associated with the exploration, production, transportation, and utilization of natural gas, this is not our only focus.

The IGU believes – as do multiple other authoritative voices, such as IHS Markit – that natural gas will remain a vital pillar[2] of an equitable global energy transition and a major contributor to a decarbonised economy of the future. Natural gas is and will continue to be the catalyst for and foundation of a more sustainable global energy system, energizing a just transition.

The IGU also believes in the critical importance of attaining the goals of Paris Agreement to ensure a sustainable and prosperous future, and as such, we recognise that the natural gas supply itself will need to be progressively decarbonised for that to happen. Hydrogen, along with other low-carbon gas technologies (i.e. biomethane, CCuS) are also imperative.

Many of our members are deeply involved with development and scaling of the decarbonised gasses industry, including hydrogen. This is far from surprising.  As Michael Leibrich, founder of Bloomberg New Energy Finance and a strategic advisor to Equinor has commented “…you will have a large-scale inflammable gas being moved around — bought, sold, traded, used, created, managed[3]” – this entire process demands the skills and experience that have been developed across the natural gas value chain – not least because without natural gas infrastructure that permits the transportation and utilisation of gaseous molecules, hydrogen would probably not be seen as a major solution.

The IGU is therefore in alignment with the major international players and their views, (such as the IEA, EU and UN) when we state that hydrogen is a nascent constituent of the sustainable global energy system that will continue to grow in its importance to a level far more significant than is currently the case.

However, to get there, we and the broader energy community must remain objective about the current level of deployment and how it lines up to the projections of development of the hydrogen economy – are we on track?  As the UK Government strategy states; “hydrogen can only be considered as a decarbonisation option if it is readily available, at the right price, the right volume and with sufficient confidence it is low carbon.”[4]

It is for these reasons that the IGU sees the development of a global hydrogen economy as a multistage process that is part of the broader trajectory to decarbonization and toward the achievement of a just energy transition. The IGU advocates for energy innovation and clean technology that involves the efficient and sustainable use of all gaseous molecules (natural gas, hydrogen, biomethane) and does not favour any particular production method, as long as it is low in emissions and technologically effective in meeting the needs of the market and ultimately of consumers.

A good example of multistage transition strategy can be seen in the DVGW German Technical and Scientific Association for Gas and Water, which has recently published its “Roadmap Gas 2050, Deliverable D1.1, Assessment of Alternative Processes for the, Production of Green and Blue H2”[5]. The study demonstrates how the hydrogen pathway for Germany could be paved – by taking a systemic approach to energy production and use – and it can provide interesting insights and lessons for other jurisdictions and players considering hydrogen.

A core assumption in this pathway is that Germany could not be self-sufficient in hydrogen production of any colour, especially for green hydrogen. It envisions a global market and views North Africa as a major potential future exporter of green hydrogen, due to its high renewable power generation potential. Looking outside of the DGDW review, there are advanced green hydrogen projects that will contribute to a global market in multiple other locations, including Chile[6]and Australia[7].

As it comes to sustainability value, one might argue that in an ideal world, green H2 would drive the majority of production because of its lower emissions – but the world we have is not ideal, and the reality is such that every pathway has its trade-offs and supply limits (be they physical, commercial, or societal). The current reality is that there is not sufficient green hydrogen production capacity in the world to meet the projected needs of the several announced hydrogen strategies around the world – the nuances of this limitation can be seen in the chart below. 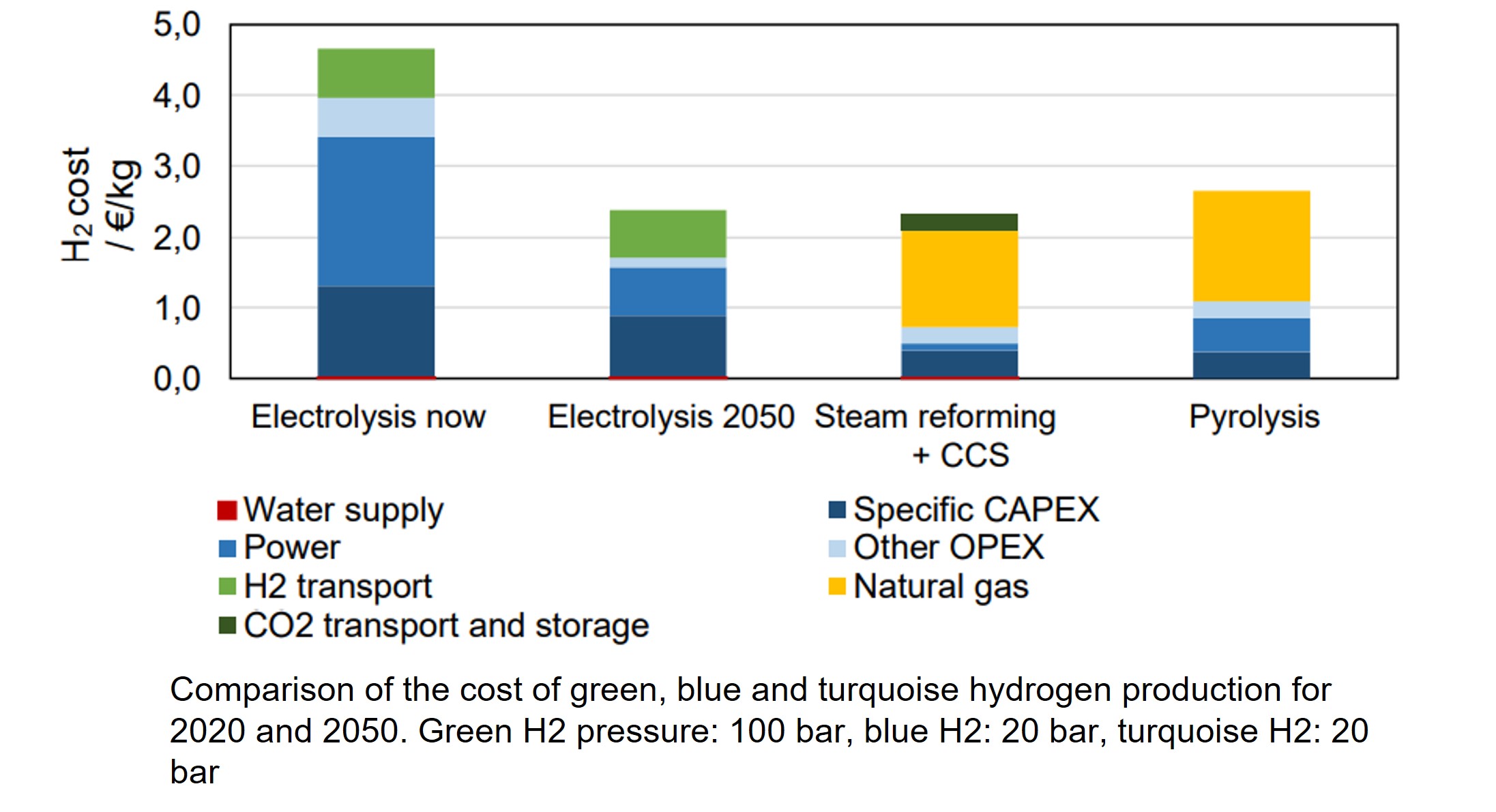 A climate change focused NGO, Bellona Foundation, picked up on the issue of a lack of sufficient renewable energy capacity and concluded that wholesale green H2 today could in certain cases increase emissions: “the challenges of producing green H2 on the majority of the European grids will result in the cannibalisation of the renewable energy production that was deployed to decarbonise other parts of our economies, hampering the transition of the electricity system and increasing emissions.”[1]

Comparison of the Carbon Footprint of Hydrogen Production Processes 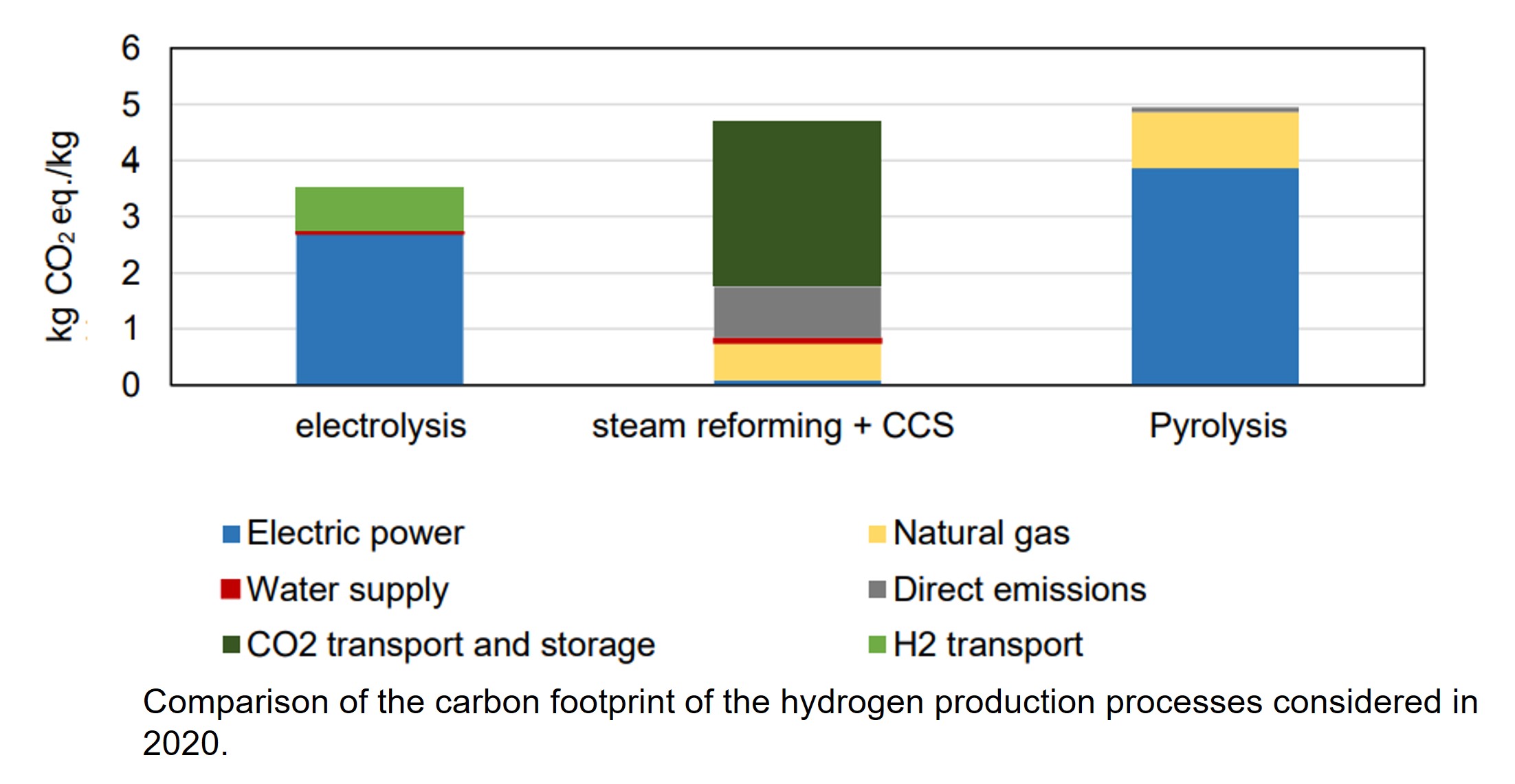 Whilst green H2 (electrolysis) is the lowest emitter of CO2[1], both blue (steam reforming & CCS) and turquoise (pyrolysis) can be seen to have a low carbon cost, compared to other energy sources, at a more affordable price.

The challenge of raising trillions in financing for the new generation and infrastructure projects in a short period of time when world economies are short on capital, also poses a risk. It is important that viable equity and debt instruments are created with a realistic long-term ROI.

That is all to say that green hydrogen alone is not yet there in a technical or financial capacity to bring the world the supply that needed to meet global hydrogen economy ambitions.  Blue hydrogen – produced from decarbonized natural gas – is a necessary component and one that is much more available to be scaled.

Blue hydrogen could “rapidly boost the share of low-emission hydrogen[3]”. It can act as an industrial incubator for a global hydrogen industry and thereby become one of the most important energy catalysts for a more sustainable and reliable energy system, with particularly strong value across transport, industrial and heating applications.

Why is this the case?

Blue hydrogen provides a pathway where the engineering, sustainability, and commercial challenges are much less pronounced and easier and quicker to overcome than for either green or turquoise hydrogen (in the short to medium term.)

Natural gas is globally available in significant volumes, carbon abatement technology is proven and in service in several live projects, and the vast majority of hydrogen that the world uses today is produced using natural gas. This is a mature and well understood process. Retrofitting CCS on existing hydrogen production plants, using abandoned oil/gas reservoirs as storage and transferring existing pipelines into supply routes all create the potential for significant production in a swifter timeframe and on a more cost-effective basis, than green hydrogen – which can be subsequently ramped up, once blue has demonstrated the broader value and industrial potential of a global hydrogen market.

Just as is the case with green and turquoise hydrogen, continued technology development and innovation play a crucial role in blue hydrogen. Full recovery of the feedstock is vital for any industrial production; it is worth noting that it is in the interest of all components in the value chain to maximise efficiency. Blue hydrogen production is evolving to avoid any possible leakage of natural gas in the value chain. The International Energy Agency[4] and multiple parties have made it clear that blue hydrogen creates significant environmental benefits over current considerations and that the constant technical innovations in both upstream and CC(U)S operations must be considered when creating metrics to objectively analyse sustainability value of blue hydrogen.

Finally, cost matters. It matters especially great when considering global solutions, as opposed to what might work only in the rich societies. If the world wants to develop a global hydrogen market in the short to medium term, it should not let the perfect be the enemy of the good.

Blue hydrogen is today a significantly lower cost option than the alternatives and the inherent engineering challenges of a new energy source can be managed more swiftly. If the world wants to develop a global hydrogen economy, the role of blue hydrogen cannot be underestimated.

[1] In this case it was assumed that the green hydrogen was produced in the MENA region. Thus, emissions from PV cell production that powers the electrolysis and from transport via pipelines with hydrogen-powered compression to the markets in Germany had to be added. For the calculation of the footprint of blue hydrogen, the carbon footprint of the power that supplies the steam reforming is of importance which is still quite high in 2020 but might result in much lower values once more renewable power can be used for the process. Also, emissions related to the transport and storage of CO2 were assessed based on the current means of (maritime) transport and injection and therefore boost the total footprint for blue hydrogen. Signification potential for reduction lies in decarbonizing this part of the process and will lead to a much lower footprint of future blue hydrogen. Finally, in 2020 turquoise hydrogen seems to come with the highest emission. The reasons are the type of reactor selected, an electrically heated moving bed reactor, and the carbon balance of the German power mix, which is currently poor. As the share of renewable energies will rise over the next few years, it is to be expected that there will be considerable potential for the reduction of greenhouse gas emissions in the production of turquoise hydrogen