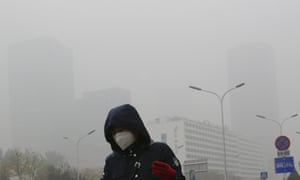 A woman wearing a mask walks along a street in smog-hit Beijing. Photograph: Andy Wong/AP

Air pollution cuts the average lifespan of people around the globe by almost two years, analysis shows, making it the single greatest threat to human health.

The research looked at the particulate pollution produced by the burning of fossil fuels by vehicles and industry. It found that in many parts of the worst-affected nations – India and China – lifespans were being shortened by six years.

The work combined research on the reduced lifespans caused by long-term exposure to particulates with very detailed pollution maps. The impact of toxic air is greater than that of cigarette smoking or HIV/Aids.

The World Health Organization has said 90% of people are exposed to unsafe air, and breathing it in is killing 7 million people a year and harming billions more.

In October, the WHO’s director general told the Guardian that air pollution is the “new tobacco”. “Despite this epidemic of needless, preventable deaths and disability, a smog of complacency pervades the planet,” said Dr Tedros Adhanom Ghebreyesus.

The early deaths figure is certain to be an underestimate as it only includes particle pollution and the five most firmly linked causes of death. Early estimates using improved models indicate a total figure of 9 million from particle pollution. New links to health damage are being revealed each month, with children especially affected. Recent work has shown connections to stunted lungs and childhood obesity.

The latest work created a measurement called the air quality life index(AQLI), which allows people to find out how much longer they would live if they breathed air that met WHO guidelines, compared to where they live.

“Around the world today, people are breathing air that represents a serious risk to their health. But the way this risk is communicated is very often opaque and confusing,” Greenstone said. “We developed the AQLI to address these shortcomings. It takes particulate air pollution concentrations and converts them into perhaps the most important metric that exists – life expectancy.”

People in India would live an average of 4.3 years longer each if their nation met the WHO guidelines. Those in Uttar Pradesh would live 8.6 years longer.

In the US, about one-third of the population lives in areas with polluted air, and those living in the most polluted counties could expect to live up to one year longer if the air were clean. In London, the research indicates an average cut in lifespan of four months.

The global average reduction in lifespan is 1.8 years – more than the 1.6 years that results from smoking tobacco. Other risks to human health have even smaller effects: dirty water and sanitation cut lifespan by seven months, and HIV/Aids by four months on average. Deaths from war and terrorism equate to a reduction of 22 days in the global average lifespan.

RT @APPEALtd: A new international survey by @IGU_News has found that Australia’s average natural gas prices continue to remain amongst the…

Just Released! | The latest Global Wholesale Gas Price Survey. | Get yours and find out what were the key #pricing trends 📈📊📉 in #NaturalGas at https://t.co/So3nN3jO5H. #energypricing #natgas #lng #gasmarkets #energy https://t.co/fCCtjxejvo